First of all, a big thank you to everyone who checked the website out! Way more people than I expected were interacting with it, and that makes me about as jolly as one can be. I got a lot of nice messages too – some of them pertaining about how to make a site, so I’m thinking about maybe putting together a page with helpful resources in the near future.

I think a good schedule for updating here would be to do it every 2-3 weeks – at least for bigger changes (e.g. if I post a new drawing on an out-of-schedule day, I can just update with that). Feel reassured about the fact that I am confident about following through with this plan. And if you want to keep up with no worries, get the RSS feed here.

I’m sharing this one because, well, I only know one person who has listened to this other than me, and it’s my dear friend André.

I have been listening to this album for about 5 years now, which is weird to think about. I know it like the back of my hand. These are 32 songs, but it doesn’t even reach the 1hr mark – It’s a sweet little collection of melodies and hooks. Some galactic wool tunes.

If you have some chocolate powder to mix with milk right now, do that, but also, do it in a glass cup. Heat it up for maybe 45 seconds, and take it out. Smell the outside of the cup, close to the bottom where some of the powder will probably accumulate. That’s what this reminds me of. Sitting too close to a CRT.

And if you like it, you should listen to her other albums. They’re all pretty good, it’s just that this one is my favorite.

Finally, here are the results of last week’s poll (as of August 13th): 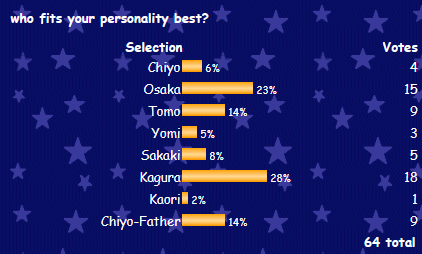 The top 3 picks were a pretty tight dispute. In the first week, Osaka was in the lead with Tomo and Chiyo-Father right behind, but Kagura swept up in the last 3 days and ended up getting the 1st spot! Wow!!!

And as far as the least-voted go, I’ll try to be more in tune with all the Kaoris, Yomis, Chiyos and Sakakis of the world now. I hope I can give ya something neat from time to time.

Hey, how’s it going?
It’s quite likely that this is going to come out about a week after I write it, since that’s when I plan to release the website. How do you like it so far?
My assumption is that most of the visitors will be coming from Newgrounds and Twitter, so, for the time being, if there are any broken elements, you can send me a message through those. My knowledge about this web thing is not very big but I’m practicing!
Anyhow...
I’m sure you can imagine how having a website would be useful, but, for this blog page specifically, my big plan is to be able to periodically share some cool stuff that other people have made. So...

<<My recommendation for today is ‘Ceiba Pentandra’!!!>>

I used to write album reviews when I was younger, and none of them were good at all. I think the most annoying aspect of a review is when you can tell the person is using words they have never used before; so this will be rather guileless.

This is a very visual and narrative album to me. Every track is a little piece of the story. Almost all of them go well over the 5min mark — so after a while, you start living inside the songs.

I am, by some unquantifiable metric, a little more blockheaded than the average person, in the sense that I’m kinda relaxed by ‘scary’ music. It’s to a level that, in theory, this would turn out to be a comfy album to listen to, but this album still sounds scary to me.‘Cerro Negro’ in particular freak me out. It sounds like dogs are mauling each other at some points. I can’t even see them. No one else could make these textures in this particular way.

With that said, I think this album is an example of genuine virtuosic ability in tone and cohesiveness. The music is already strong, but when you combine it with the album cover and titles, it’s better than most books. (If I were a good reviewer, I would insert some blurb here being confident and smug about my statement, but I’m completely right anyways so I won’t even bother.)

VERDICT: I would love to read an ERROR IN PROGRESS story.

PS: Here’s a free code for the album:

Go on https://errorinprogress.bandcamp.com/yum to redeem it! It will show up on your Bandcamp collection. (⌐■_■)b

To close things off, here’s the first official™ zona.plankton poll, where you can decide which one of the ‘Azumanga Daioh!’ students (and Chiyo’s dad) most resemble you, or vice-versa. I’m more of a Tomo.

I don’t want to make this long-winded, especially for the first post, so I’m ending it here.
Again, thank you so much for visiting! Making the website has been super fun and I hope I can continue to improve it. Also, you already know this, but lots more drawings and music will come very soon.
Have a good day︵‿

thank you for visiting! take a look around – what do ya think? pretty nifty, right?

i’ve been meaning to make a website for a while – the idea came to me last year! but i only got my shit together to learn some HTML, CSS and JS a few months ago. since then i’ve been focusing on this, some projects on NDA, and of course, life stuff.
so far everything is fairly standard, but i plan to update it frequently. maybe a secret or two? i’ll never tell you where they are, though.

one last thing: the sidebar is pretty empty, right? where's the sweets and goods? well, if everything goes right, there should be a lot more content here until the end of the year. that’s right. so don’t come to me with any “why in the heck” until 2023.